Exercise Fastidious, testing the response to the detection of Xylella fastidiosa, was held in Brisbane on 14-15 November 2018. There were 59 attendees from 29 organisations: the Australian Government, all state and territory governments, 13 plant peak industry bodies, PHA, Hort Innovation, CSIRO and representatives from New Zealand government and industries. AOA CEO Greg Seymour attended and participated on behalf of the Australian olive industry.

The participants were asked to test elements of a response to the detection of Xylella with a focus on the production nursery sector and the broader implications to all industries, using the Emergency Plant Pest framework and principles.

Participants considered the technical feasibility of eradication, complexes (i.e. the combination of Xylella and an insect vector), and whether there are any Australian native insect vectors of the disease. They also developed a Response Plan.

Agreement was that the Hort Innovation-funded exercise was a success, with initial exercise outcomes including:

Greg Seymour summed it up for the olive industry:

“Being involved with such a diverse range of experienced biosecurity practitioners and experts was an invaluable exercise. Responding as teams to the case study helped us understand the complicated processes and practicalities we would need to implement in the olive industry if (crossed fingers) Xylella were to reach our shores.

“The two days of intense training and planning reinforced the importance of investing in systems to minimise the risk of Xylella from ever getting to Australia. The AOA will be increasing biosecurity awareness in the olive industry over the next few years as part of its industry risk management program. With Xylella – prevention is far better than cure.”

A full exercise report will be prepared by PHA in the first half of 2019.

**Note: Xyella is currently rated the number one plant risk in Australia, and is responsible for the decimation of hundreds of hectares of olive groves across Puglia, Italy. Learn more here. 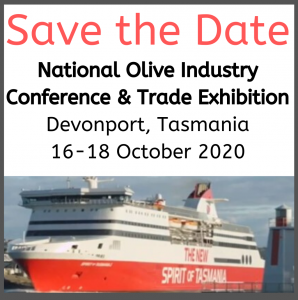